For the first time since 1998, Croatia secured a place in the semi-final and the celebrations of the fans were at par with their president who couldn’t stop cheering from the stands. She later even celebrated with the players in their locker room.

With Croatia advancing to the World Cup semifinals for the first time since 1998, a video clip of the country’s president celebrating wildly from the stands has gone viral. Croatia’s first female President Kolinda Grabar-Kitarovic was in attendance on the night her team dumped hosts Russia out of the tournament following a 4-3 penalty shootout win. Seated beside FIFA President Gianni Infantino and Russian PM Dmitry Medvedev in the VIP section, she was seen raising her hands and doing a little victory dance to celebrated Croatia’s second goal. 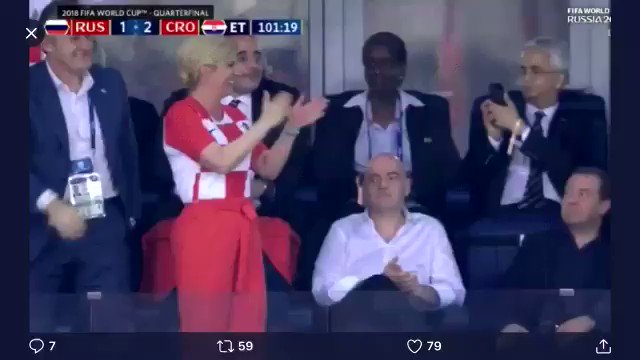 Croatia’s President, Grabar-Kitarovic, gave her team tremendous moral support by being there personally.
President Kilonda Grabar-Kitarovic of Croatia even boarded economy class with fans to support their team during the Croatia vs Russia match. 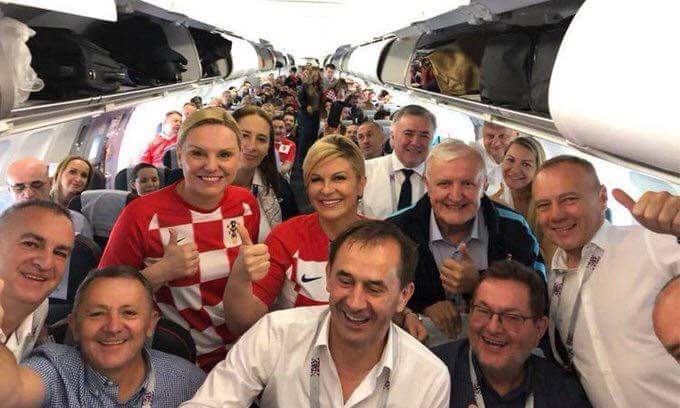 The supportive Kolinda Grabar-Kitarović, President of Croatia, has been in the office since 19 February 2015. She is the first woman to be elected as the president of the republic, she also became the youngest president in Croatian history when she assumed office at the age of 46.

Prior to becoming the president she served as Assistant Secretary General for Public Diplomacy at NATO. Born in a small village in Croatia, she grew up to be a bright and ambitious girl. She excelled in her studies and attended the Diploma Course at the Diplomatic Academy of Vienna before earning her master’s degree in International Relations.

She was elected to the Croatian Parliament and later on became the Minister of Foreign Affairs. Over the ensuing years she steadily rose through the political ranks and held various prestigious governmental positions. She rose to become the Croatian Ambassador to the United States by replacing Neven Mimica, in 2008. After becoming the Assistant Secretary General for Public Diplomacy at NATO, she set her ambitions even higher and successfully ran for presidency.

Kolinda Grabar-Kitarović was born on 29 April 1968 in Rijeka, SR Croatia, SFR Yugoslavia (now Croatia), to Dubravka and Branko Grabar. Her family owned a butcher shop and a ranch.

She was a bright student and was selected for a student exchange program when she was 17. She moved to Los Alamos, New Mexico, subsequently graduating from Los Alamos High School in 1986.

After high school she enrolled at the Faculty of Humanities and Social Sciences, University of Zagreb from where she graduated in 1992 with a Bachelor of Arts in English and Spanish languages and literature.
She is married to Jakov Kitarović and has two children.
She is proficient in 7 languages! including Croatian, English, Spanish and Portuguese.

Research Paper Writing Service – How to Find the Ideal

How to Pick Custom Research Papers